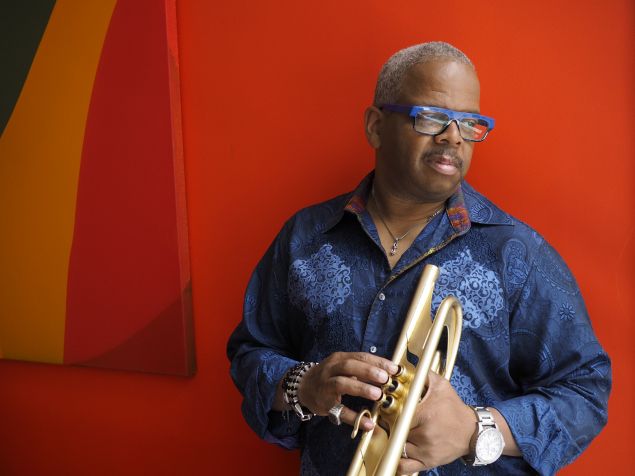 “He just gives it to me and we go to work,” Terence Blanchard tells Observer of his decades-long working relationship with Spike Lee. The New Orleans-based composer has collaborated with Lee on numerous films, including this year’s Da Five Bloods[1], which is out now on Netflix.

“It’s at a point now where we don’t really talk much,” he continues. “He’ll give me ideas about what he wants, but most of the time he wants strong melodic content so what we’ll talk about is whether there are some instruments we really want to feature in the orchestra. For BlackkKlansman he wanted some R&B sounds. For this film he said he wanted a huge orchestra. But after working with him for 30 years I know what he’s looking for in his films.”

Blanchard, who earned his first Oscar nomination for Best Original Score for BlackkKlansman, first found out Lee was working on a Vietnam film at the Oscars last year. That early on in the process, Lee planned to use several songs from Marvin Gaye’s 1971 album What’s Going On, which quickly excited Blanchard. “The thing about working with Spike is you have to learn to curtail your expectations because he gets you hyped,” he notes. “He got me hyped and then he went away for a few months to shoot so I was sitting there waiting for a film.”

Blanchard adds: “When he showed it to me I was literally blown away. I was like, ‘Wow, he did it again, but he’s upped the ante even more.’ He puts you on guard. The best analogy I can give is that it’s like being on the court with Lebron James in the last moments of the game and you’re the one in the corner and all of a sudden he passes it to you. You go ‘I can’t fuck this up’ and then take the shot.”

I wanted to go intense on the action [scenes] at first, but that’s not what Spike wants. He wants a very heroic kind of approach. Very melodic.

The score for Da Five Bloods veers away from your typical action film and feels unlike most of the Vietnam movies that have come before (although there is a moment where Wagner’s “Ride of the Valkyries” plays over a scene). Blanchard didn’t look back at any other scores or attempt to replicate a traditional war movie score. Instead, he relied on Lee’s predilection for big, melodic orchestra pieces, bringing in bass and snare drums to pay tribute to the military. The final score was recorded by a 90-piece orchestra, which allowed Blanchard to create sweeping pieces of music that feel both balanced and massively cinematic.

“The cool thing is, with the action constantly flowing, like in that first battle scene, having that many brass players allows me to keep them engaged,” Blanchard says. “If we have eight French horns, I can have four playing one part and then I can continue the sound with the next four and go back and forth without it having dropped any of the imagery. I wanted to go intense on the action [scenes] at first, but that’s not what Spike wants. He wants a very heroic kind of approach. Very melodic. The driving thing in his films is the melody and sometimes, in most war films, it’s the opposite.” 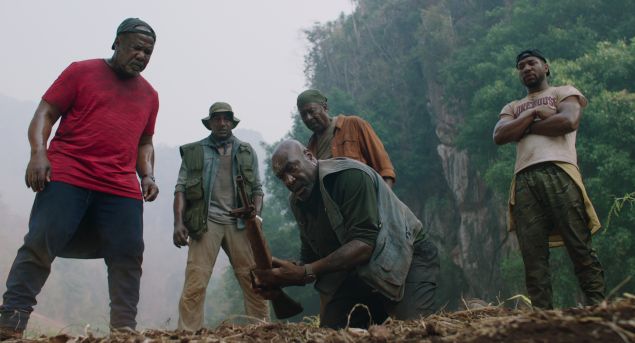 The key to unlocking the score was that initial battle scene, where the characters flash back to their time in Vietnam for the first time. The unrelenting, high-action scene is nearly five minutes long, and Blanchard spent three days writing the piece to accompany it, mostly on piano, and then two more days orchestrating it. It was the composer’s biggest challenge, but also his starting point.

“I felt like that scene was so important and such a beautifully crafted scene,” he explains. “I took my time going back and forth. There were moments when I thought I had it and I would listen to it and go, ‘No, that’s not it.’ And I’d start over again. But once I cracked that then it laid palette down for the rest of the film. When I first saw the film I knew that scene was going to give me problems just because of the way it looked. Because I work at a certain pace I was getting a lot of anxiety and kept thinking I needed to move on, but the other part of me said, ‘If it’s not right you can’t move on.’” 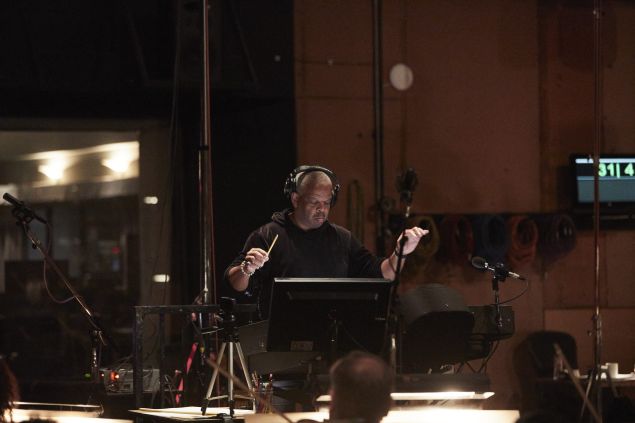 Blanchard also composed the score for HBO’s new eight-episode remake of Perry Mason, which takes on a completely different tone to Da Five Bloods. The show’s soundtrack, Perry Mason: Chapter 1 (Music From The HBO® Series – Season 1), features five tracks from Blanchard[3], who also performed on the songs. Because the series is set in 1932, the composer wanted to evoke the jazzy style of the era without sounding too dated.

“We want to pay homage, but we don’t want to live in the past,” Blanchard says. “So what I wanted to do with the score is to do something fresh that used some colors of the period. You hear the trumpet, you hear the saxophone. For the first few episodes I even had a string quartet. I think it allowed us to create something that’s different from other shows, but that works really well with this show. For me it almost feels like an extended film, just cut into eight episodes. It’s truly a journey. It’s been a great, great experience working on this thing. I’ve enjoyed the discovery of it.” 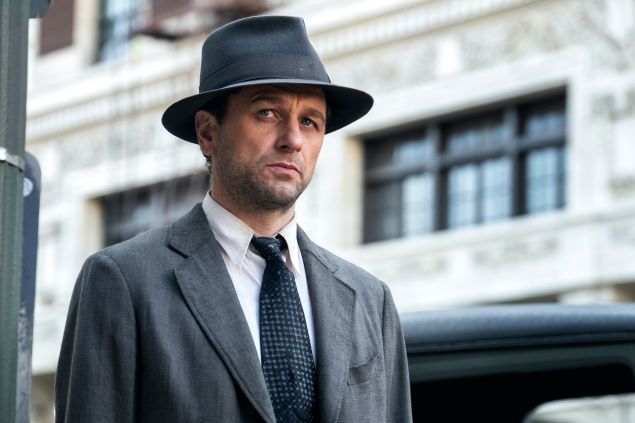 Working on Perry Mason, which was created for HBO by Rolin Jones and Ron Fitzgerald, has also gave Blanchard an opportunity to experience a production that truly embraced diversity, especially behind the scenes. The composer has been working in Hollywood for decades, often as one of the only Black film composers being given high-profile work, and for him it was notable to be surrounded by such a diverse group of people.

It’s frustrating because you want to think about: Who is the best at doing this? Not: Who’s female? Who’s Black? Who’s Asian? But that is the conversation we have to have.

“It’s all types of people working on a show,” Blanchard says. “When I got there there were female editors and one was Asian. And I hate mentioning people’s ethnic backgrounds because it cheapens it because to me it’s about the quality of their work. But since we’re in this diversity situation right now those are things we have to talk about. It’s frustrating because you want to think about: Who is the best at doing this? Not: Who’s female? Who’s Black? Who’s Asian? But that is the conversation we have to have. That’s what was great about working on Perry Mason. And Spike has always been that way—people don’t know that about him—but he’s always been that way. When I first started working with him I was expecting to see an all-Black crew. No, it’s whoever is the best and whoever is available, and that’s how it should be.”

Blanchard, who has several more projects in the works, including Lee’s upcoming documentary, is ready for Hollywood to do the work needed to move forward. And he’s hopeful that can happen.

“That was one of the most beautiful things about the Oscars last year—I thought it was one of the most diverse classes they’ve ever had,” Blanchard says. “But still we’ve got a lot of work to do. Look at all the women who are capable of scoring films but don’t get the amount of access to be heard. Look at the African Americans. Marcus Miller and myself, we used to have a joke that we couldn’t be in the same room at the same time because if they blew it up there wouldn’t be any Black film composers left. I think we have a lot of work to do. And I think Hollywood is up to the task.” 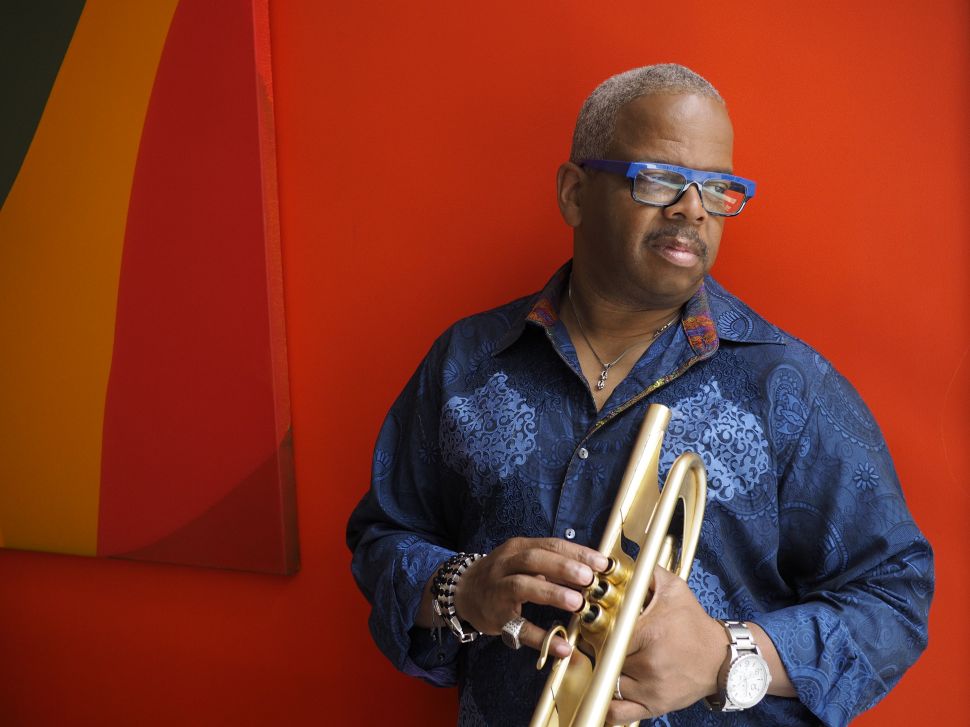